Death of a Crimea Veteran
(Press Association) Auckland, Feb 13The death is announced of Captain Frederick Armstrong, formerly H.M. 15th regiment, aged seventy. He served in the Crimean war and was wounded at Sebastopol. He fought in the Taranaki and Waikato Wars with his regiment for many years. He lived at the Thames and latterly at Devonport.
West Coast Times , Issue 11524, 13 February 1900, Page 3
Death of Captain Armstrong
A Crimean Veteran

Captain Frederick J. Armstrong (1), an old resident of this colony and a well known military veteran, died last evening at his residence, Hillside, Devonport, at the age of about three score and ten, after a short illness.The tall stalwart figure of Captain Armstrong was well known in Auckland and especially on the Exchange, where he was frequently to be seen in connection with his gold mining speculations.He came of a race of soldiers, and to the last he retained the dignified bearing of an old Imperial officer. The late Captain Armstrong entered the British Army in his youth, and did garrison duty at Malta, Gibraltar, and other stations.He went through the Crimean war with his regiment, the 14th Foot, and was present, as an ensign, at the battle of the Alma. He served with the 14th in the trenches before Sebastopol and was wounded there. 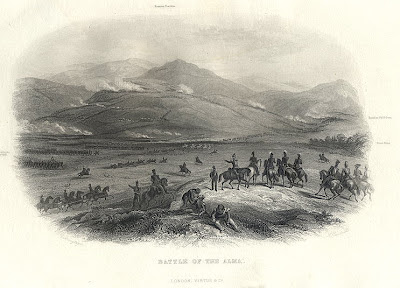 Battle of the Alma
At the beginning of the Taranaki war in 1861 he arrived in New Zealand with the second battalion of the 14th Regiment, under Colonel James, and was in command of one of the three companies of the 14th during General Sir Trevor Chute's celebrated march through the Taranaki bush from Wanganui to New Plymouth in the early sixties; Captain Armstrong also served with his regiment throughout the Waikato war of 1863-64. The first engagement he took part in in this campaign was the fight at Otau, Wairoa South, in 1863. Thence he marched with his comrades up the Waikato valley, and took part in several fights, notably at Koheroa, when he was the first man to mount the Maoris' earthworks.For his military services he gained the Crimean medals, with the Sebastopol clasp, and also the New Zealand war medal. After leaving the army on a pension Captain Armstrong settled in New Zealand, and lived for many years at the Thames and Coromandel, and for some years past at Devonport, where he was much respected. He leaves a widow and seven grown-up children (four sons and three daughters), some of whom are at present in Australia.
Auckland Star, Volume XXXI, Issue 37, 13 February 1900, Page 2

Email ThisBlogThis!Share to TwitterShare to FacebookShare to Pinterest
Labels: Devonport