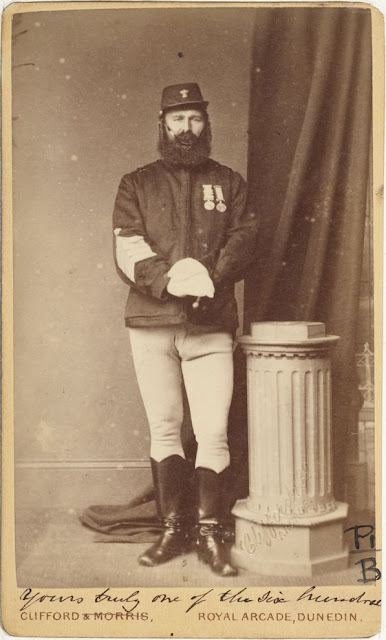 John Bevin, one of the Six Hundred in the Charge of the Light Brigade, as a police sergeant, ca. 1873-1875 / photograph by Clifford & Morris, Dunedin
File number: FL3266031.
Mitchell Library, State Library of New South Wales.


DEATH OF SERGEANT-MAJOR BEVIN.
The adventurous life of Sergeant-major Bevin came to an end, after a brief illness, at 20 minutes to 7 o'clock yesterday morning, the immediate cause of death being diabetes and carbuncle. Up to a week ago the sergeant-major performed his duties at the Central Police Station, and when he found himself compelled to seek leave from the office it was fully expected he would be back at his post in a few days. It was not, indeed, till Tuesday of this week that his case was regarded as serious, but there was then a distinct change for the worse, and Dr de Zouche, who had been in attendance, deemed it advisable to consult two other physicians. On Tuesday night Inspector Hickson visited the patient and was recognised by him, but almost immediately thereafter the sergeant-major lapsed into a state of insensibility, and he never regained consciousness.

The feeling of regret at his death will be widespread, not only because he was a hero — for, as is very generally known in this colony, he was one of the noble Six Hundred" who made the famous charge at Balaclava at which "all the world wondered," and he gained the Turkish and Crimea medals— but also because of his sterling qualities as a man. In his capacity as sergeant-major of police here he had many disagreeable duties to perform, and he had many unfortunate cases to deal with, but though he must have prosecuted innumerable persons to a conviction — and it is said that he never forgot the face of one of these, and it is certain that he knew the life history of most of them — he was a man of deep sympathies and with a warm heart; and many a person who has started on the downward path has been arrested in his or her career by words of advice and caution from the lips of the subject of this obituary notice.

It was at Bandon, County Cork, Ireland, that John Bevin was born, the date being the 19th July 1831. He served his apprenticeship to the carpentry trade in Tipperary, but when he was 18 years old he enlisted at Cork, joining the cavalry branch of the service, and in 1854 he sailed with his regiment, the 8th Royal Hussars ("The King's Own"), for Bulgaria. His regiment was part of the first division of the Allied Army that proceeded to Gallipoli, thence to Varna, and on to Eupatoria to take part in the Crimean campaign. Private Bevin was present at the rout of Alma; he rode with his squadron, as above-mentioned, in the charge of the Light Brigade; he was present at the Battle of Inkermann and served before Sebastopol. During these experiences he received altogether 18 wounds, mostly of a slight character, from the sabres and lances of the enemy, but was never struck by a ball. His reminders of Balaclava were a contusion of the skull and a slit in the ear, the latter leaving a scar which he carries to his grave. At one period of the Crimean War he was taken prisoner, and spent a few weeks in a Russian hospital about 100 miles inland, and was subsequently exchanged with other prisoners. On the return of the troops to England Private Bevin was one of those balloted out of the regiment on the occasion of the strength being reduced to a peace footing. A comrade of his, who was specially anxious to obtain a discharge, offered Bevin L10 to exchange positions, but the latter declined the offer. The man referred to remained by the regiment when it was shortly afterwards restored to its active strength as a consequence of the outbreak of the, Indian Mutiny, and he wrote to the sergeant-major a short time ago. Coming out to Victoria a little while after being paid off, John Bevin entered the police service, and for a time was attached to the Richmond depot as roughriding instructor. He came to Otago in November 1861, and joined the force here under Mr Branigan, who had come across in the preceding August and received authority to increase the number of his men. Bevin entered the service as an ordinary constable, and in exactly a twelvemonth he was promoted to the rank of sergeant. Very shortly afterwards he resigned and set up in business as a livery stable keeper. A few months of that experience sufficed, and he rejoined the force and regained his stripe. On the 1st of April 1874 he was made a first-class sergeant, and in November of that year he attained to the position of sergeant-major, the rank which he held to the day of his death.

In 1882 he was presented by the citizens of Dunedin with a silver cup in commemoration of the anniversary of Balaclava, and also in recognition of his long service in the police. On the occasion of a concert held in the Garrison Hall some couple of years ago in aid of the fund for relieving distressed survivors of the charge at Balaclava, Sergeant-major Bevin returned thanks, on behalf of his old comrades, for the interest that was being taken in them and the assistance that was being forwarded to them, and on that occasion he received a great ovation from a large audience. By a recent mail he received particulars of the death of two men who had taken part in the charge, and, as he erased their names from the list of survivors published in book form some time ago, he remarked that they were a rapidly-thinning band, and that it would soon be his own turn. No one dreamt at the time how soon that turn would come. He leaves a wife and grown-up family of seven — three sons and four daughters.

At the conclusion of the business at the City Police Court yesterday forenoon, Mr P. G. Pryde, one of the presiding justices, referred to the death of Sergeant-major Bevin in the following terms :- "I do not think it will be right to allow the court to adjourn without some reference being made to the loss the public service has sustained in the death of Sergeant-major Bevin. As one who has been intimately acquainted with the sergeant major for about 25 years, I may say that I personally feel the loss very much, and realise that the public have lost a good servant and a man who played his part well in the world, as we all know. It is only becoming that reference should be made to his long and faithful services, and that sympathy should be expressed with his family in their bereavement. I regret exceedingly the death of a man whom I had a great deal of pleasure in being connected with in the business of the court." Sergeant Geerin briefly thanked the Bench for the kindly remarks made, and also acknowledged the reference to the deceased officer on behalf of the mourning family.

The funeral is fixed for Sunday afternoon at 2 o'clock. At the Salvation Army meeting last evening, Captain Burton made reference to Sergeant-major Bevin's death, and said that in him the Army had lost a good friend. The sergeant-major had in many ways, and on many occasions, shown the kindness of his disposition and the goodness of his health in assisting them in their rescue and other work, and his death would be regretted by the members of the Army in Dunedin.
Otago Witness, Issue 1994, 12 May 1892 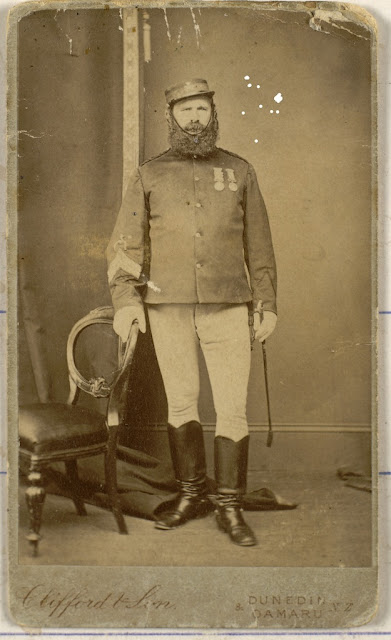 Email ThisBlogThis!Share to TwitterShare to FacebookShare to Pinterest
Labels: Dunedin