James Carson, son of Robert and Ann Carson of Edenderry, was born on the 15th August 1823, near the town of Lisburn, Co Antrim, Northern Ireland. He worked as a weaver before enlisting with the British Army at Belfast, in 1844.

James, with his wife Mary and daughter Ann, traveled to India as a private with the 57th Regiment of Foot (The Diehards). The regiment returned to Dover Castle, England in 1846, and later saw service in Leeds, Enniskillen, Armagh, Dublin, and Kilkenny.In 1853 they were sent to the Ionian Islands in the Mediterranean, and were ready for action after the Battle of the Alma, which took place on the Crimean Peninsula.

The 57th Regiment arrived at Sebastopol in September 1854, and fought at the Crimea for the remainder of the war. James Carson was present at the battles of Sebastopol, Balaclava and Inkermann, for which service he was later presented with medals and clasps. The regiment remained in the Mediterranean at Corfu and Malta, and it was during this period that James was invalided back to England, suffering from an eye disease, which many of the soldiers had contracted due to the climatic conditions.

He came before the Medical Board at Kilmainham Hospital, Dublin in 1858, and received his discharge as “unfit for duty” later that year. From this date he was registered as a Chelsea Pensioner, first receiving his pension from the depot at Manchester, England.

At the age of 42, with his wife and family of three, he traveled by train from Ashton-under-Lyne, to Glasgow, Scotland, where they boarded the ship “Resolute” for passage to New Zealand. Although the immigrants were destined to populate land in the Waikato, James and Mary did not wait to take up their land grant, but instead sailed on to Wellington.

Ann Carson, their eldest daughter, who had married a soldier in the 57th Regiment while the family were in Malta, had arrived in New Zealand in 1861, when the regiment were sent from India, to take part in the conflict over land settlements in Taranaki.

In 1865, Ann’s husband, Sergeant-Major Robert Fraser, was in charge of the Cuba Street Barracks in Wellington and it is very likely that the two families wished to be re-united.
As a military settler, James continued to draw his pension when he joined the Veteran Corps of the Volunteers in Wellington, serving for 4½ years.

During this period he was recruiting men on behalf of St John Braningan, and Col. Reader of the Armed Constabulary. The family were living in Tinakori Road, and later in Parliament Street.

James Carson fell while stepping down from the tram at the corner of Willis and Manners Streets, and was taken to Wellington Hospital suffering from a broken hip.

He died in hospital 3 days later, on the 1st July 1890, and was buried in the Mount Street cemetery. 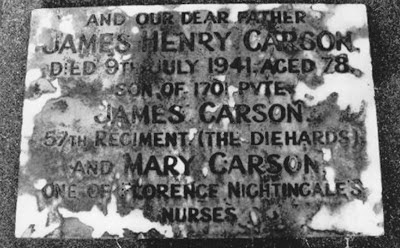 This photo was taken at Terrace End Cemetery, Palmerston North and is the headstone on the grave of James and Mary Carson's son, James Henry Carson.
Private James Carson's grave at Mt Street cemetery, Wellington no longer has a marker.
Posted by Early Canterbury Photography at 9:50 PM