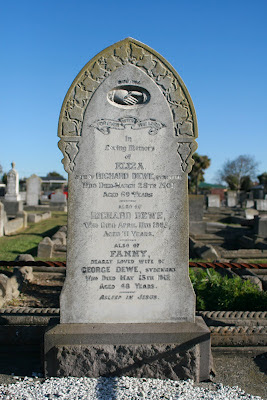 The headstone of Richard Dewe, Sydenham Cemetery, Christchurch.
A Crimean veteran, Mr Richard Dewe, has just passed away. Born at Sutton Courtney, Berkshire, he enlisted in May, 1854, in tho 23rd Regiment Foot, the Welsh (sic*) Fusiliers, and earned the Crimean medal with bars for Sebastopol, Balaclava and Alma, and also the Turkish Crimean medal. He served for two years and two months, and was discharged on pension at the age of twenty, on account of disability, owing to wounds received in action. He came to Canterbury in 1874, and mainly resided in Sydenham. He worked for about twenty years for Vincent and Co., and since, then he lived a retired life, his kindly and generous disposition making him greatly respected. Mr Dewe was present at the inspection of veterans by the Prince of Wales, on the occasion of his visit in 1901. He was twice married, and leaves two daughters.
Press, Volume LXII, Issue 12167, 12 April 1905, Page 6

Sergeant Luke O'Conner of the 23rd
Regiment of Foot, the Welch Fusiliers winning the Victoria Cross at the Battle of Alma
Wikipedia

* It was one of the oldest regiments in the regular army, hence the archaic spelling of the word Welch instead of Welsh

Posted by Early Canterbury Photography at 1:13 AM

Email ThisBlogThis!Share to TwitterShare to FacebookShare to Pinterest
Labels: Christchurch