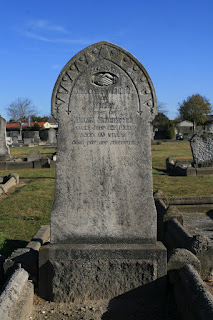 above - the headstone of Mary Burnside the wife of Hugh Burnside in Sydenham Cemetery.
Hugh Burnside is also buried in this plot.
Death of Crimean Veteran
(Special to the Herald.)CHRISTCHURCH, this day.
The death is announced of Hugh Burnside, one of the last of the Crimean veterans. He served throughout the Crimean campaign in the 6th Brigade of the Royal Artillery under General Pennefather.After the war the brigade was stationed at Malta for five years. Sergt. Burnside was gunnery instructor. On his return to England he was chosen to test Armstrong's new rifled gun against a rival make, the targets being plates from Black Prince and Warrior, two of the earliest ironclads. For his handling of guns he received great praise. In 1873 he came to Lyttelton, and for forty-four years he has been a well known figure at the railway sheds. Seven of his sons and grandsons are at the war.Poverty Bay Herald, Volume XLIV, Issue 14280, 24 April 1917, Page 7
Posted by Early Canterbury Photography at 8:49 PM