born 5 December 1831 Sanderstead, Surrey, England
died 5 July 1923, 70 Division Road, Christchurch, New Zealand
A Crimean Veteran:
The Late Mr John (sic) Gudsell, of Christchurch.
One of the few remaining Crimean veterans died in Christchurch last week, in the person of Mr Thomas Gudsell, who was in his 92nd year. As a young man he went to the Crimea and served in the commissariat for one year and ten months, returning to England by the last transport from the Crimea. He was later one of the miners engaged in the construction of the Lyttelton tunnel.He leaves a family of one daughter (Mrs Hight) and five sons - Mr Thomas Gudsell, Timaru; Mr Robert Gudsell, St Albans; Mr. George Gudsell, Maheno, Otago; Mr Harry Gudsell, Riccarton; and Mr James Gudsell, Auckland.Mr Gudsell's other descendants number 26 grandchildren and 19 great-grandchildren.Mr Gudsell did not take an active part in public affairs, but was, many years ago, a member of the Weedons School Committee.(from unknown newspaper) 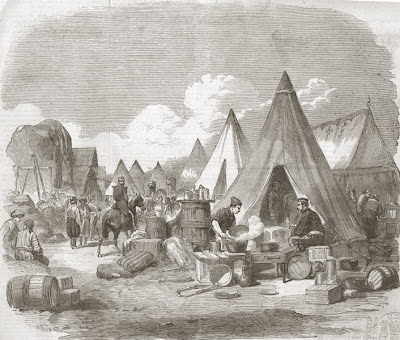 The Commissariat Camp in the Crimea, 3rd Division.

Email ThisBlogThis!Share to TwitterShare to FacebookShare to Pinterest
Labels: Christchurch